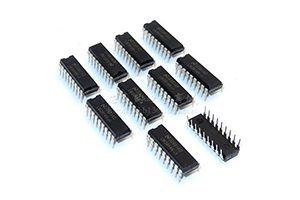 In the LED electronic display, the driver IC's role is to receive the display data in accordance with the protocol (from the receiver card or video processor and other information sources), produce internal PWM and current time variation, output and brightness and grayscale refresh related to the PWM current to light the LED. The display's display features and determines how it will appear.

LED driver chips can be divided into general-purpose chips and special chips. The so-called universal chip, the chip itself is not specifically designed for LED, but some with LED display part of the logic function of the logic chip (such as string 2 and shift registers), while the special chip refers to the LED luminescence characteristics designed specifically for LED display driver chip.

LED is a current characteristic device, i.e. under the premise of saturation conduction, its brightness changes with the change of current, rather than by regulating the voltage change at both ends. Therefore, one of the most important features of a dedicated chip is the provision of a constant-current source. A constant-current source can ensure the stable driving of LEDs and eliminate the flickering phenomenon of LEDs, which is the prerequisite for LED displays to display high-quality images. Some special chips also add some special features for different industry requirements, such as LED error detection, current gain control and current correction.

In 1997, the first LED display special drive control chip 9701 appeared in China, from 16 grayscale to 8192 grayscale span, to realize the video of what you see is what you get. At the end of the 1990s, Japanese and American enterprises successively launched 16-channel LED constant-current driver chips, and at the beginning of the 21st century, Chinese Taiwanese enterprises' driver chips have also been mass produced and used. Today, in order to solve the problem of PCB wiring for small-pitch LED displays, some driver IC manufacturers have introduced a highly integrated 48-channel LED constant-current driver chip.

In the performance index of the LED display, the refresh rate and grayscale level and image representation is one of the most important indicators. This requires high consistency of current between channels of LED display driver ICs, high speed communication interface rate and constant current response speed. In the past, the three aspects of refresh rate, grayscale and utilization rate is a kind of relationship between one and the other, to ensure that one or two of the indicators can be more excellent, it is necessary to sacrifice the remaining one or two indicators. To this end, a lot of LED display in the actual application is difficult to have the best of both worlds, either the refresh is not enough, high speed camera equipment shooting easy to appear under the black line, or grayscale is not enough, color brightness is not consistent. With the technological progress of driver IC manufacturers, has been a breakthrough in the three high problem, has been able to solve these problems.

In the application of LED electronic display, in order to ensure the user's eye comfort for a long time, low brightness and high gray become a test of driver IC performance is a major standard.

Energy saving: As a green energy, energy saving is the eternal pursuit of LED display, but also an important criterion to consider the performance of the driver IC. Drive IC energy saving mainly includes two aspects, one is to effectively reduce the constant current inflection point voltage, and thus reduce the traditional 5V power supply to 3.8V below operation; the second is through the optimization of IC algorithms and design to reduce the driver IC operating voltage and operating current. Currently there are manufacturers have launched a 0.2V low inflection voltage, enhance the LED utilization of more than 15% constant current driver IC, using a 16% lower supply voltage than conventional products to reduce heat generation, so that the LED display energy efficiency is greatly enhanced.

Integration: As the pixel pitch of LED display decreases rapidly, the number of package devices to be mounted per unit area increases geometrically, greatly increasing the component density of the module driver surface. P1.9 small pitch LED for example, 15 sweep of the 160 * 90 module needs 180 constant current driver IC, 45 line pipe, 2 138. so many devices, so that the PCB available wiring space becomes extremely crowded, increasing the difficulty of circuit design. At the same time, such a crowded arrangement of components can easily lead to soldering problems and reduce the reliability of the module. With less usage of driver ICs and a larger PCB wiring area, the demand from the application end forces driver ICs to take a highly integrated technical route.

At present, the mainstream driver IC suppliers in the industry have successively introduced 48-channel LED constant current driver ICs with high integration, which integrate large-scale peripheral circuits into the driver IC wafers to reduce the complexity of PCB board design on the application side and avoid the problems caused by the design capability of engineers or design differences among manufacturers.